Liz Sweibel
Liz Sweibel
The New York City lockdown that began in March ground my studio practice to a halt. The thread-and-vellum drawing I was working on was unfinished.  But when I looked at it again I saw it was finished in this changed world.  Fortunate as I am to have my studio at home, I was essentially paralyzed.

I started taking walks in my Brooklyn neighborhood to get some exercise and fresh air, at first terrified of encountering anyone.  I started taking cellphone photos because early spring was so exciting and so entirely dissonant with the pandemic taking hold in NYC.  My walks became idea-driven, more or less, giving me something to look for, and I posted to social media. I eventually saw that the walking, idea-generating, picture-taking, and posting had become my studio practice, and that the photos are good and speak to my experience of this time but also my point of view at all times.

My walking territory is large, so the neighborhoods and routes differ.  Both of my parents lived in Flatbush at some point, and it means something to me that I walk where they walked in the 1930s and 1940s. That's a whole other story, but they died young and when I moved here in 2008 I didn't know I was moving into the cradle of Sweibel-Roth history.  My dad lived around the corner when he was about 10.

There are several photo galleries here, with many images.  They are not designed to be inhaled in one gulp. This is a project in process; I add and I subtract.  I do minimal editing of the photos:  just straightening and occasional cropping.

Tangible work will come out of this project at some point; I'm grateful to be working toward it.

The pandemic walks have covered the Brooklyn turf outlined in blue.  It's all a work in progress.  My territory is growing.

... Or, it was.  As of October 9 a large chunk was declared a hotspot.
Statement and Map[s] 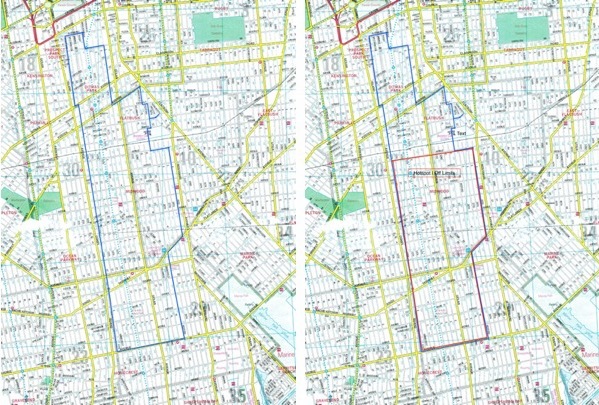